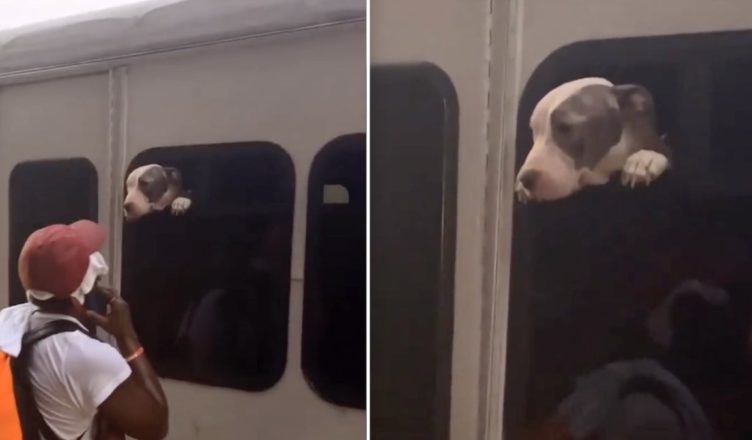 “We’re gonna get you out, puppy!” That’s what Melissa Geerlof promised when she saw a Pit Bull stuck in a hot bus.

Melissa was walking home from the gym when she heard a dog crying and screaming for help and saw an abandoned bus.

The white bus was parked by the side of the street and had no license plates, the VIN number was scratched out and it was filled with trash inside. 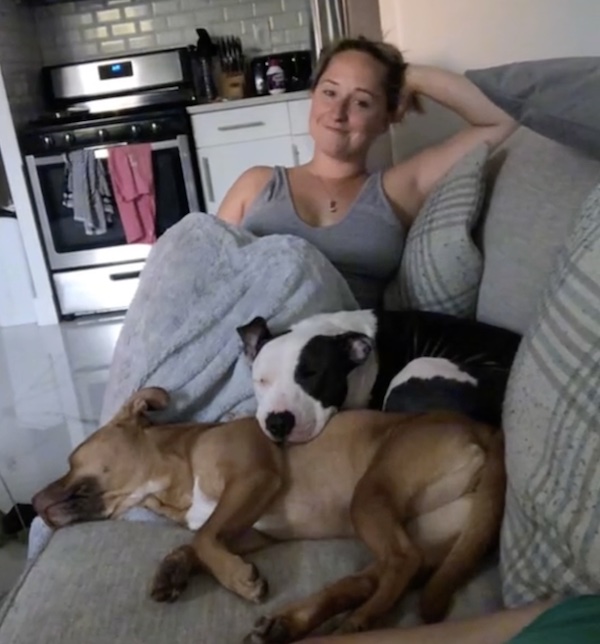 After approaching the bus, Melissa saw a dog peek out of one of the windows.

The Pit Bull was on her tippy toes to stick her head out of the window; she was tied to one of the seats. Melissa was extremely worried because it was a very hot day.

Soon, Melissa’s boyfriend, Ben, and some neighbors joined her to figure out how to free the distressed dog.

They called police four times and they finally came after an hour. While they waited for police the neighbors gave the pittie (now named Lexi) water and some food.

According to Melissa, the officers originally said they would take the dog back to their precinct overnight and then to the animal shelter.

But when the police went to get a crate and returned, they told Melissa and the neighbors that because they didn’t know who the dog’s owner was they would be taking the dog to the shelter but that the dog would (likely) be euthanized unless one of them wanted to take her.

When the police opened the bus doors a “waterfall of trash” came flowing out of the bus.

And as soon as Lexie was outside, she ran over and gave Melissa a hug.

After giving Lexie a bath, Melissa took her to a vet. Melissa noticed Lexie had long nails, a problem with her skin and conjunctivitis. But Melissa’s big concern was whether Lexie would get along with her other pittie Roadie. She didn’t need to worry. The two quickly have become pals.

Next Melissa wondered if Ben would be okay with another dog. He was grumpy at first, but now he gets double kisses from Lexie.

It’s not been a big adjustment for Lexie. She has made herself at home and loves hanging out with her new family.

She loves nothing better than hanging out with her family on the couch, the bed and wherever they are.

One tikToker wrote, “It was absolutely meant to be that you walked by that bus and found her.” We’d have to agree.