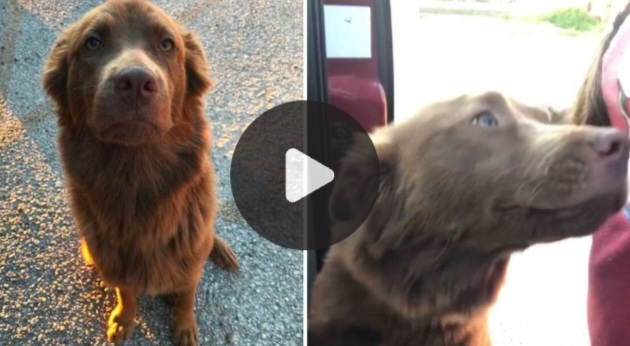 When Kristin Erwin heard of a stray dog wandering near a dock in Channelview, Texas, she hopped in her car as soon as she could.

Erwin, who often assists with dog rescues, was heartbroken when she arrived at the scene and found the sweetest girl pacing the docks, all alone.

Erwin hadn’t necessarily been planning to take the dog home with her, but as soon as she saw the pup, she knew she couldn’t leave her behind — especially as the friendly girl began wagging her tail and rubbing up against Erwin’s legs. After giving the charming stray food and water, she noticed that not only was the dog extremely thin, but she appeared to be lactating. Erwin knew that could only mean one thing — there were puppies nearby.

Soon enough, with some intel from a local she met nearby, she found all eight of them. Erwin couldn’t help but feel immense compassion for the stray, later named Marla, who had been caring for so many puppies all by herself.

“She had to have been drained and exhausted keeping them alive,” Erwin said. “I really feel for stray momma dogs, so it was especially hard for me.”

Erwin fostered Marla and her puppies for a month and eventually handed them off to another foster home, where they stayed until the puppies were old enough to be vaccinated.

Slowly, they grew into gentle, playful dogs who craved affection. With help from Paddy’s Paws and Misfit Mutts Dog Rescue, Marla and all of her babies quickly found their forever homes.

Though Erwin misses Marla and her puppies, she’s so happy that she was able to help them find families who will love them forever.

“They didn’t have to be the next generation of stray dogs,” Erwin said. “I’m so glad I was there that day and could change their future.”