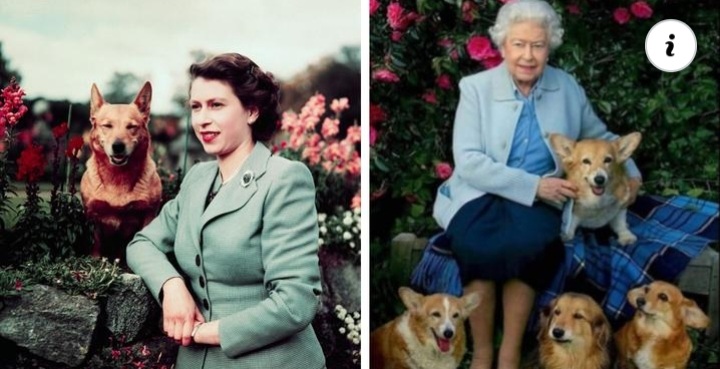 The longest-reining monarch in the history of the United Kingdom – her majesty Queen Elizabeth II – has sadly passed away, on Thursday, at age 96.

She enjoyed a huge popularity during her reign that lasted over 70 years, and now she leaves behind not only a nation and a heartbroken family, but also her loyal dogs!

Queen Elizabeth has always been great fond of dogs, especially corgis whom she considered family. “My corgis are my family,” her majesty used to say! She has – so frequently – been photographed alongside her beloved dogs. “She loves animals and she absolutely adores dogs,” the royal biographer Ingrid Seward wrote. “She always has done, they were her first love and they will be her last.”

At the time of her passing, the Queen had four dog – 2 Pembroke Welsh Corgis(her very favorite breed) Muick and Sandy, a Cocker Spaniel – Lissy and a Dorgi(a Corgi-Dachshund mix) named Candy.

Now, with the Queen gone, the dogs, or the corgis at least, will be adopted by the the Duke and Duchess of York, Prince Andrew and Sarah Ferguson(his ex-wife), CNN reports. It was Andrew that gifted the corgis to his mother.

They[the corgis]will return to live at Royal Lodge with the Duke and Duchess,” BBC reports. “It was the Duchess who found the puppies, which were gifted to Her Majesty by the Duke.” Queen Elizabeth II had over 30 dogs during her life. Susan was her first dog, a Pembroke Welsh Corgis who was a gift for her 18th anniversary. One of her many dogs – Willow – even featured alongside the Queen in the James Bond movie. The Queen’s great love for the corgis was motivated by their “energy and untamed spirit.”