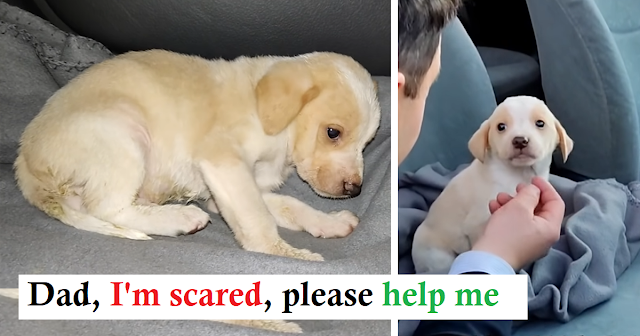 The dog had been sobbing in agony for three days when the rescue received the call about the abandoned puppy.

When Paw Squadron realized the poor dog was in pain, they started looking for it right away. They looked all day before finding the little white and tan dog in a vacant lot full of trash.

He was covered in his own filth and half-encased in a trash bag. But they managed to transport him in safety. He was dehydrated, suffered from an injury, and was unable to move his shoulder or leg as they examined him. 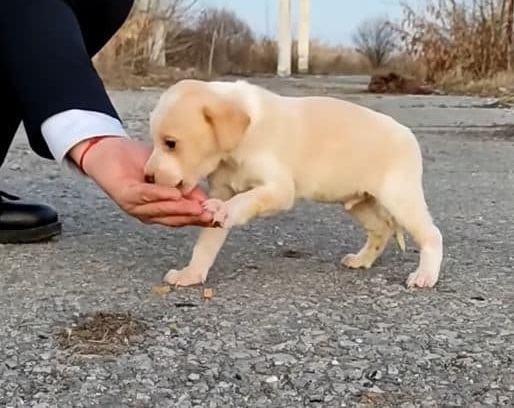 They empathized with the little guy. This little puppy shouldn’t have had to go through what she did. Was he abandoned by his mother or a mean person? We’ll never find out. What is certain is that the puppy wouldn’t have survived much longer on his own without rescue.

The starving puppy was given the only food the rescue team had with them. Once he had some food in his stomach, they jumped in the car and drove three hours to the dog’s new home, where he would be safe and loved. 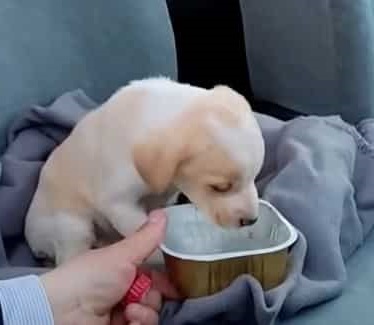 The puppy eventually fell asleep despite his fear. When they got home, the little puppy started to unwind and first started to wag his tail. He was given a bath to get rid of the dirt, and the cute puppy seemed to enjoy getting cleaned up.

For a small pup, however, receiving all this love and care is taxing. He quickly fell asleep while cozily covered in a blanket. Most likely the first time spending the night inside, where it was warm and safe, and where breakfast would be ready.

The adorable puppy devoured his breakfast in the morning. Despite everything he had been through, he appeared healthy, but a vet was still needed to make sure everything was alright. The good news was that his leg and shoulder would heal on their own once they got there.

The abandoned puppy was so cute and quickly developed into an adorable pet. He soon acquired a puppy friend and was thriving in his new life. This little guy is the sweetest thing ever, and we are so grateful that Paw Squadron was able to save him.

We hope you enjoyed the touching tale of his rescue. There is such a great need for foster parents and animal rescuers. Each of them is a hero. Please tell your friends about his touching story.